Quantum Supremacy: What Now? Let's Get You Up To Speed! - Investment Capital Growth

Quantum Supremacy: What Now? Let’s Get You Up To Speed!

Quantum Supremacy: What Now? Let’s Get You Up To Speed!

Imagine a computer that could crack the most sophisticated network in a mere few seconds. Perfectly model complex weather and biological systems.

What could you do with such computational power? Invent new drugs? Create simulations of multiple universes? What about optimizing your investment portfolio? 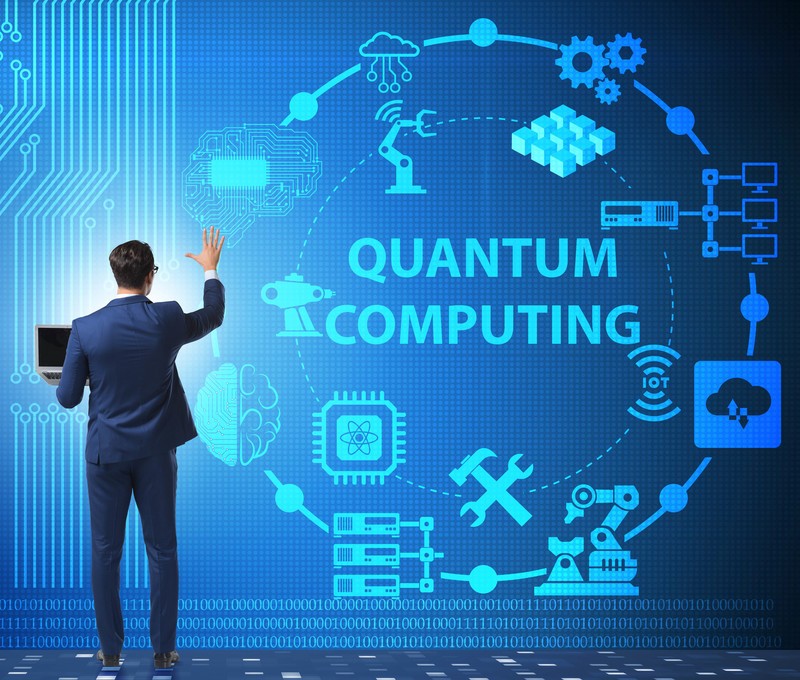 Google made a monumental announcement of “quantum supremacy”: completing a computation that would normally take 10,000 years on the most powerful supercomputers in just 200 seconds.

Meanwhile, companies like Rigetti Computing are edging us ever closer to democratized quantum in the cloud.

But what exactly is quantum computing?

A NEW KIND OF COMPUTER

A quantum computer operates in a fundamentally different way from a classical computer.

In classical computing, a “bit” is a tiny chunk of binary information: either a 1 or a 0.

A “qubit”—or a quantum bit—is the newer version of this idea. Unlike binary bits, which are an either/or scenario, qubits use “superposition.” This allows them to be in multiple states at once.

Think of the two options of flipping a coin: heads or tails. Now think about a spinning coin—where both states flash by at once. That’s superposition.

While a classical computer requires thousands of steps to solve a hard problem, a quantum computer can accomplish that same task in only two or three steps.

A quantum machine can bump that up to a trillion or more.

IBM’s largest quantum computer has 65 qubits. And just last year, the company announced plans to build a 1,000 qubit computer by 2023. 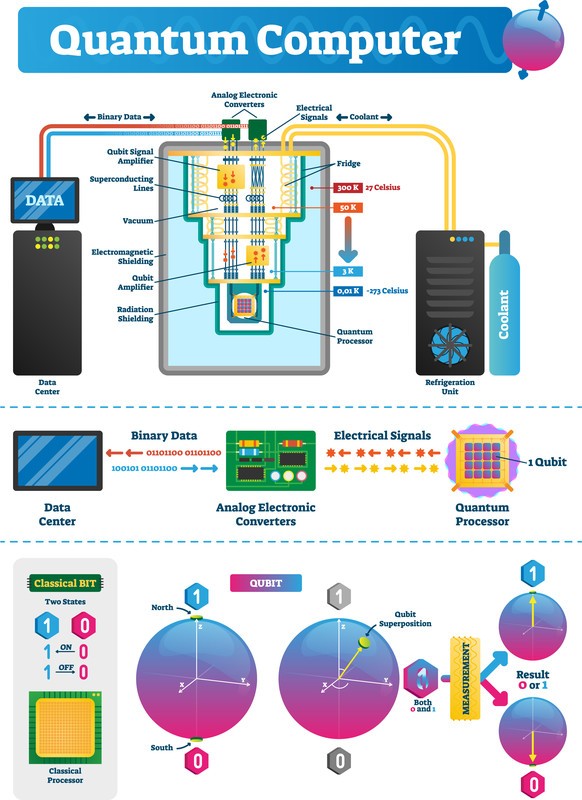 If a quantum computer is vastly more powerful than a classical computer, then Google’s quantum supremacy announcement is a massive game-changer for the future of computing.

Using a machine called Sycamore with a chip consisting of 53 qubits, Google’s team of researchers was able to perform a task called random circuit sampling.

This entails performing random operations on the qubits, “literally as if the code of their program was chosen randomly,” as explained by computer scientist Bill Fefferman of the University of Chicago.

The values of all qubits were then measured, and the whole process was repeated multiple times. The resulting distribution is nonrandom due to quantum effects and is exorbitantly challenging (not to mention time-consuming) to calculate with classical computers.

Ultimately, it took Sycamore 200 seconds to repeat the sampling process a million times, while a top-of-the-line classical supercomputer would take close to 10,000 years to complete the same process.

A smaller version of the Sycamore chip (just 12 qubits) has been used to simulate chemical reactions, a process that could lead to useful discoveries like improved batteries, fertilizers, and carbon sequestration techniques.

THE STORY OF RIGETTI

The coldest place in the universe is located in sunny California.

On the outskirts of Berkeley, inside an oversized warehouse, hangs a large white pipe. It’s a human-made contraption, a next-generation cryogenic refrigerator cooled to .003 Kelvin, or just north of absolute zero.

The pipe belongs to Rigetti Computing, the next contestant aiming to build useful quantum computers.

The company got going in 2013, when a physicist named Chad Rigetti decided that quantum computers were a lot closer to prime time than many suspected, and that he wanted to be the one to push the technology over the finish line.

In pursuit of his vision, Rigetti left a comfortable job as a quantum researcher at IBM, raised nearly $200 million in funding to date, and built the coldest pipe in history. Over fifty patent applications later, Rigetti now manufactures integrated quantum circuits that are directly linked to a quantum computer in the cloud.

One of the biggest and most exciting aspects about Rigetti, however, is their push towards democratization of quantum computing.

Right now, if you go to Rigetti’s website you can download Forest (https://qcs.rigetti.com/sdk-downloads), their quantum developer’s kit. The kit provides a user-friendly interface to the quantum world.

With it, almost anyone can write a program and run it on Rigetti’s computers, ranging from 8 to 31 qubits. To date, over 120 million programs have already been run on their machines.

And other companies are fast following suit, as Microsoft, IBM, and Google have now rolled out quantum cloud services.

Within the quantum computing community, the very notion of “quantum supremacy” is under scrutiny. “Supremacy” implies that quantum computers will replace traditional computation, rather than serve as a supplement.

By contrast, another term often used (proposed by Rigetti) is “quantum advantage.” According to the company, this concept is demonstrated when an algorithm run on a quantum computing platform “has either a faster time to solution, a better quality solution, or lower cost of classical compute compared to the best classical algorithm.”

In either case, quantum computation offers tremendous quantitative advantages over classical computers in a range of problem domains.

And already, current state-of-the-art quantum computers, including Google’s Sycamore and IBM’s Hummingbird, have reached a count of 53 and 65 qubits, respectively.

Yet today, we have no concrete idea of what innovations might arise once quantum computing matures at scale. But what we do know is tantalizing.

Because chemistry and physics are quantum processes, computing in qubits will usher in what Oxford’s Simon Benjamin calls “a golden age of discovery in new materials, new chemicals, and new drugs.”

It will thrust aside today’s computing constraints to artificial intelligence, fundamentally transform cybersecurity, and allow us to simulate systems of unprecedented complexity.

As Chad Rigetti explains, “[The technology] change[s] the economics of research and development. Say you’re trying to create a new cancer drug. Instead of building a large-scale wet lab to explore the properties of hundreds of thousands of compounds in test tubes, you’re going to be able to do much of that exploration inside a computer.”

In other words, the gap between experimental questions and any new solution—whether novel drug, optimized material, or personalized product—is about to become a lot smaller.

Brace yourself. The era of democratized, scalable, and cloud-accessible quantum computing has begun.

Cliff Locks is a trusted mentor, confidant, and advisor to CEOs, C-Level Exec, and high-potential employees to help them clarify goals, unlock their potential, and create actionable strategic plans.

Available to join your Board as a Certified Master Professional Board of Director and Advisor.

I am a trusted mentor, confidant, and advisor available by Zoom and by phone to be your right-hand man, who will make a significant contribution and impact on your way to success.

As a Trusted Mentor, Confidant, and Advisor, I support you, along with your company’s strategic and annual operating plan. This plan may include marketing, sales, product development, supply chain, hiring policies, compensation, benefits, performance management, and succession planning.

Most successful leaders enjoy talking to someone about their experiences, which is why most develop a close relationship with a Trusted Confidant—a person with whom they feel free to share their thoughts, concerns, and ideas without fear of sharing too much or being judged by the people they lead, or their colleagues and superiors. I am a sounding board who will help you to better develop and see your ideas through to fruition.

The most effective Executive find confidants who complement their strengths and sharpen their effectiveness. Bill Gates uses Steve Ballmer in this way; Warren Buffett turns to vice chairman Charlie Munger. In the end, both the Executive and their organizations benefit from these relationships.

As your trusted confidant, I am always by your side, holding your deepest secrets and never judging. Everything discussed is held in complete confidence.

What many executives feel is missing from their busy life is a trusted business person who understands the holistic complexity of both their business and personal life.

I strive to provide solid financial, business, and family expertise and serve as a dispassionate sounding board, a role I like to call “Executive Confidant.”

By holding a safe place for the Executive to work on life path issues as well as direction, I repeatedly see remarkable benefits as personal values become integrated with wealth and family decisions, enhancing a more meaningful life.

As an Executive Confidant, I welcome a confidential conversation about the most important issues facing the business leader, including:

When I do my job well, I facilitate positive action in both your professional and personal life. This consistently has a positive benefit on impacting people within the sphere of your influence.

The job of an Executive can be lonely. For various reasons, confiding in colleagues, company associates, family members, or friends presents complications. Powerful, successful, and wealthy individuals often isolate themselves as a protective reaction because of their inability to find people they can trust and confide in.

Successful people are often surrounded by many people, yet they insulate and isolate themselves to varying levels of degree. This isolation factor is not often discussed in the same context because the assumption is that success and wealth only solve problems. The false belief is that it does not create more problems, when, in fact, sometimes it creates a unique set of new challenges. Success and wealth do not insulate you from the same pitfalls that the everyday person faces. It may give you access to better solutions perhaps, and that is what I can help you achieve. Financial business success can create unique vulnerabilities, often overlooked as most people feel that the “problems” of the wealthy are not real-life problems.

The Executive Confidant can be particularly helpful when:

• Aligning life priorities with the responsibilities of wealth. • Wanting more meaning and purpose in life. • Desiring a candid and experienced perspective. • The answers often come from within, and we cannot arrive at them easily. • Clarity often comes into focus, with skilled questions and guided discovery. The right questions can be the first step in achieving ideal outcomes.

Who can you turn to when you need to find clarity? Who is your “Executive Confidant”?

Referrals to a team members or family members are always welcome.

One-to-One – Individual payment: Strategic Coaching: $295 per month (weekly for 30 minutes to 1 hour depending on the depth of our conversation Zoom meeting).

Board of Directors or Board of Advisors: